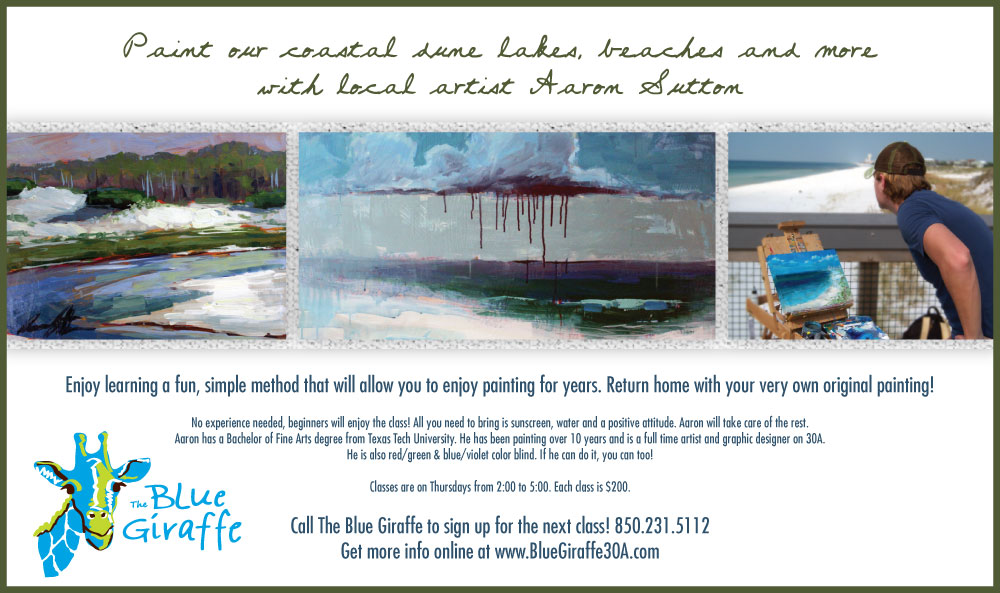 Learn to Paint with Aaron Sutton

Learn to paint with local artist, Aaron Sutton! Sign-up for a semi-private class with an incredibly gifted, colorblind artist. Aaron will meet you at one of the gorgeous coastal areas along 30A and teach you a simple technique using acrylics on canvas. You’ll be amazed at the beautiful artwork you will create and you’ll have such fun doing it! No experience is needed and supplies will be provided. You only need to bring sunscreen, water, and a positive attitude.

Aaron has a Bachelor of Fine Arts degree from Texas Tech University. He has been painting for over 10 years and is a full time artist and graphic designer on 30A. He is also red/green and blue/violet color blind. If he can do it, you can too! Read more about Aaron Sutton by visiting our ARTISTS page and our BLOG.

We would like you to meet Rob and Ginger … they had a blast learning to paint with Aaron while recently vacationing on 30A : 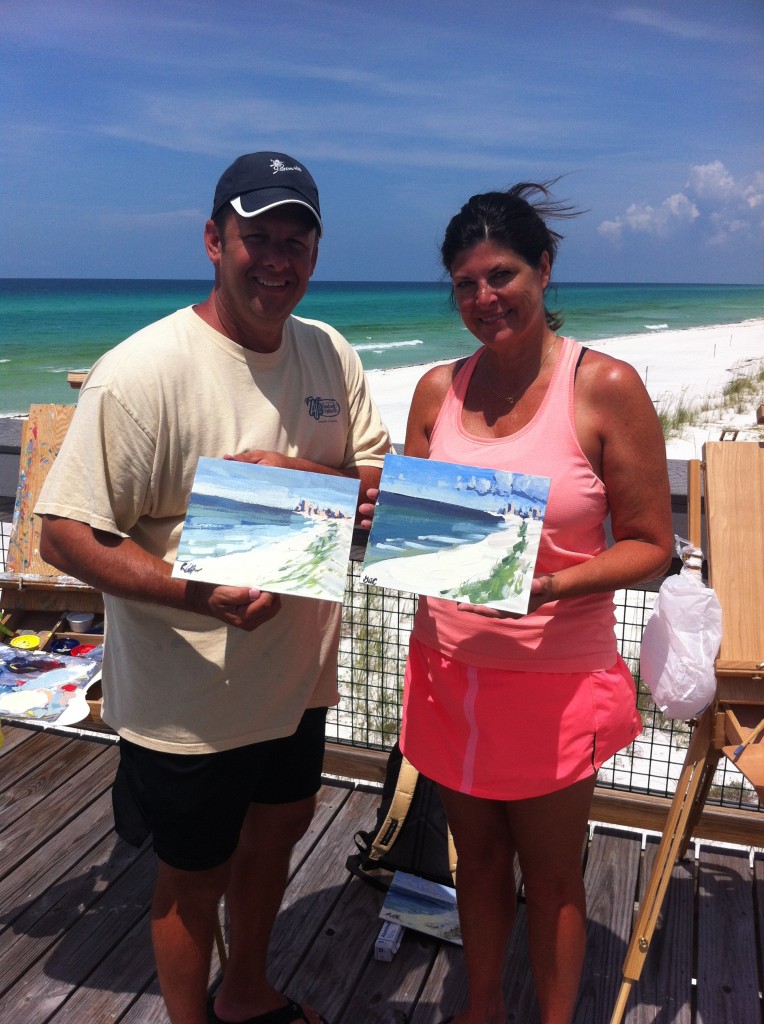 Testimonial from one of Aaron’s former students:

“I am an art major at Union University. For my spring break I got to spend a couple of hours meeting Mr. Aaron Sutton as well as painting with him at a local park on the beach. I am not an experienced painter, but it is one form of art that I enjoy doing. I have taken a couple of art lessons and classes while growing up, but I learned more from Mr. Sutton in just one lesson. I enjoyed viewing his work that was in his gallery as well as a few current pieces he was working on. He guided me while I painted a landscape of the beach. I got to experience techniques that he uses himself, which were very new to me. I had a great time and I was impressed that I painted the painting I did. Mr. Sutton was not only a good teacher, but also very encouraging and intentional. As an art student i appreciated that because pursuing art as a career is my goal and it is usually not an easy one. As soon as I got back home I bought certain things Mr. Sutton uses and I am now practicing the methods and techniques that he practiced with me. Overall my experience with him has given me way more confidence as a painter and helped me explore things about paint I did not know before.”  – Kenzie Carter 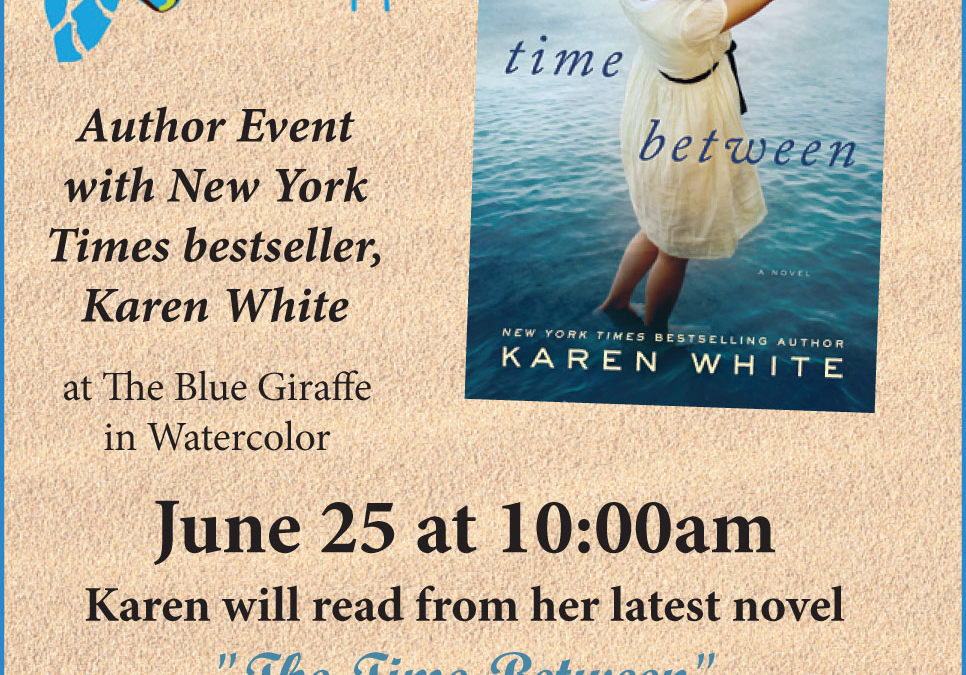 Interview with the Author – Special to The Walton Sun by Deborah Wheeler.

Karen White, a part-time resident of the WaterColor community, has penned her 16th novel — “The Time Between” — and will be reading from it and signing copies at The Blue Giraffe on June 25.

White said her latest work spans between 1944 Hungary to modern-day South Carolina. “It’s about sisters and forgiveness,” she said. The idea for the book came through an article the author came across in a newspaper a few years back.

The article was about two sisters who escaped Hungary in 1944, never married, lived in the same house together and were very socially active in their community. However, the sisters suddenly became reclusive, and a couple of years later, both were found dead in their home within days of each other. “Obviously something happened to make them become reclusive, and while I didn’t know what it was, it sparked my imagination and I made up my own story. So, it is a work of fiction,” White said. White doesn’t have a sister, but her mother had five and she always enjoyed sitting in on their sisterly talks and watching their close interactions. “I always wished I had a sister and the way sisters interact intrigues me,” she said.

A native of “nowhere” while growing up, White lived all over the world, with the longest time spent in one place — the seven years she lived in London. A constant, though, were summers spent with her grandmother in DeFuniak Springs. So, it became a given that she would bring her own family to vacation in South Walton. White says reading has always been her favorite thing to do. She describes writing as a dream that she never took seriously even though she still remembers a teacher telling her “You’re so creative, you should write!” Instead, she went into the field of business management until her daughter was born and she moved from Washington, D.C., toAtlanta. Ten years later, after leaving the business world, she began writing her first novel in 1996 just to see if she could. “In the Shadow of the Moon” took three years to complete and came out in 2000. She entered it in a literary contest and was thrilled when it won. One of the judges was an agent who asked to represent her. “In the Shadow of the Moon” was nominated for the prestigious RITA award in 2001 in two separate categories. Her books have since been nominated for national contests including two more RITAs and the SIBA (Southeastern Booksellers Association) Fiction Book of the Year. She has also twice won the National Readers’ Choice Award for “Learning to Breathe” and “On Folly Beach.”

She enjoys writing what she refers to as “grit lit” — Southern women’s fiction. However, White’s creative writing sparks could be ignited by almost anything, she said, such as someone saying something interesting, or a picture she might see in a coffee table book. Her interests are varied and easily inspired.

“I know when I get a tingly feeling that I am on to something,” she said. That tingly feeling has paid off as the author’s work has made it onto the New York Times Best Sellers list twice. “That achievement came as a complete surprise, but it is good to know that more than family and friends are buying my work,” she said. Her 2012 releases, “Sea Change” and “After the Rain” debuted on the New York Times bestseller list at number 12 and 14 respectively. Her fourth and final book in her Tradd Street series, “Return toTradd Street,” is scheduled for publication in January 2014.

Debbie Taylor, who co-owns The Blue Giraffe at WaterColor with daughter Christi Sheffield, said White’s publisher contacted The Blue Giraffe to be a part of a multi-city national tour as the author debuts this first hardcover and novel, “The Time Between.” “”The Time Between” is by far one of the best books I have read in many years,” Sheffield said. “I started reading it on a Monday night and was finished by Thursday night. I literally stayed up reading past midnight every night because I didn’t want to put it down. What a beautifully written and enthralling story with such an important life message. We are thrilled to be part of her national book signing tour.”

White will read an excerpt from the book, followed by a short Q&A session before the signing. The event begins at 10 a.m. 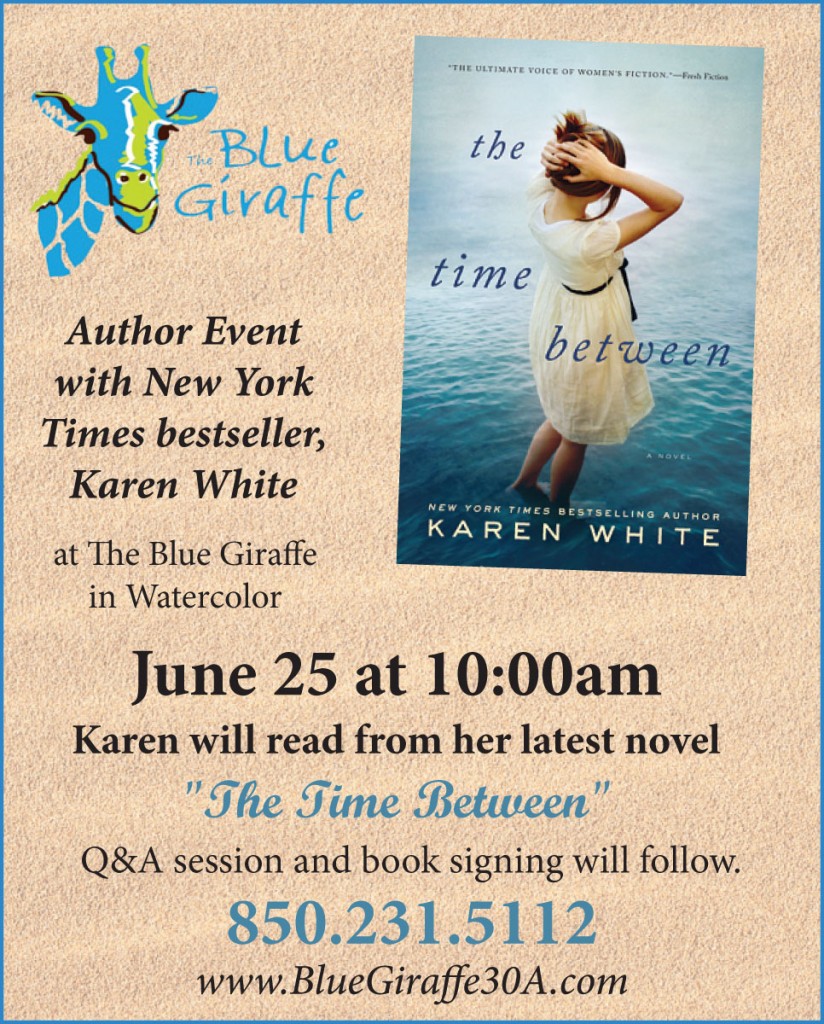 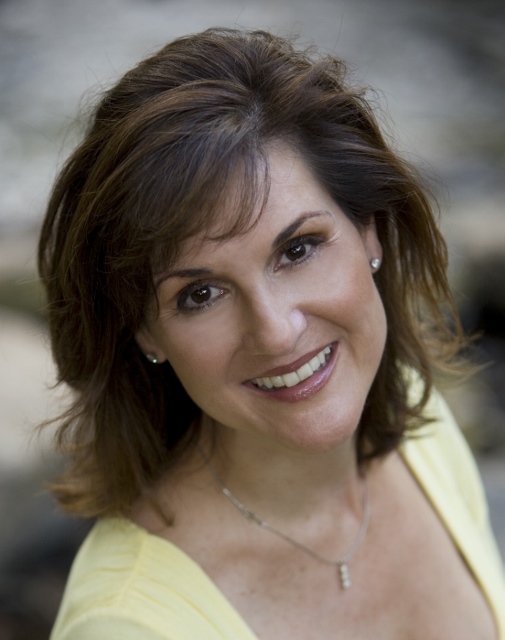 New York Times bestselling author Karen White was at The Blue Giraffe on June 25th as part of a national tour promoting her latest novel and first-ever hardcover, THE TIME BETWEEN.  We are thrilled to report that her 16th novel debuted at #25 on the New York Times bestsellers list!  Despite a little rain, lots of loyal fans joined us to hear Karen read from THE TIME BETWEEN, then enjoyed a lively discussion with this gifted author and gracious woman.

The Blue Giraffe co-owner, Christi, stated ” The Time Between is by far one of the best books I have read in many years! I started reading it on a Monday night and was finished by Thursday night. I literally stayed up reading past midnight every night because I didn’t want to put it down! What a beautifully written and enthralling story with such an important life message.”

Karen took the time to autograph several copies of her book which are available in our gallery. If you were unable to attend her event, we will be happy to mail you a copy.  Simply call us at 850.231.5112 to place your order.

Read this great interview with Karen that was published in The Walton Sun on June 22, 2013:   ‘Grit Lit’ by Deborah Wheeler – Special to The Walton Sun 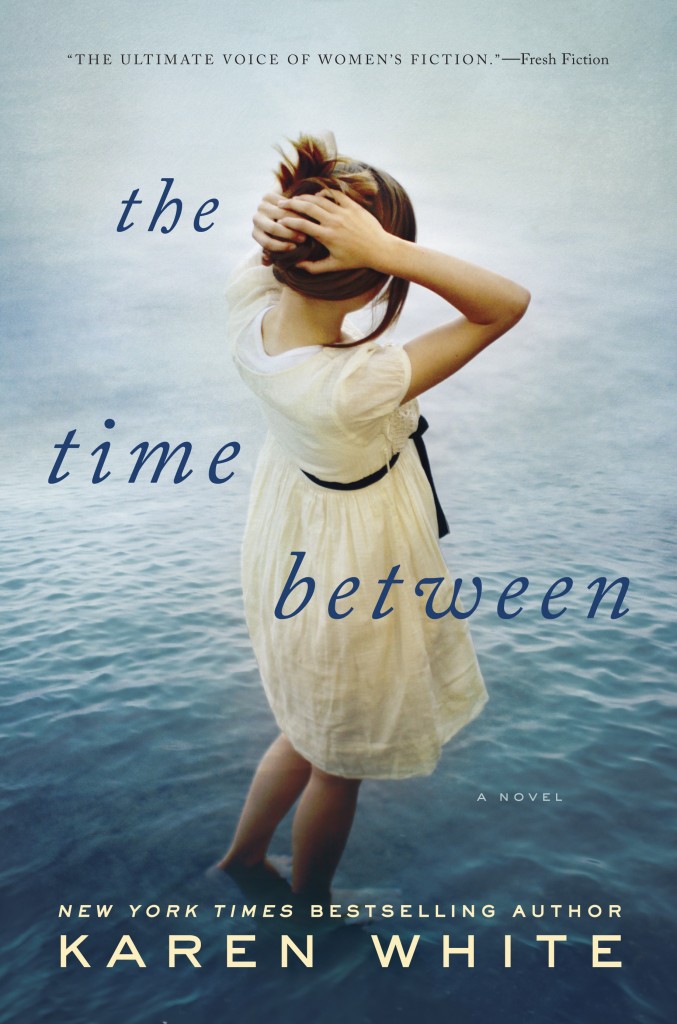