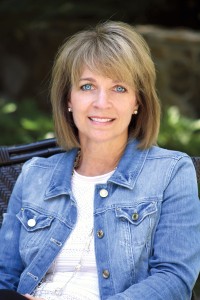 ABOUT THE AUTHOR
Julie Strauss Bettinger received her master of fine arts in creative
nonfiction from Goucher College in 2013. Her work as a freelance
writer spans twenty-five years, primarily for publications in Florida
and the southeast United States. Her writing appears in Florida Trend,
Florida Small Business, FSU’s Research in Review, and Florida State
Law magazine. She wrote a weekly business column for the
Tallahassee Democrat and was the editor of Tallahassee and Emerald
Coast magazines. For nearly twenty years she was the editor for two
law-enforcement journals. Her published works include the
coauthored book Blasted by Adversity: The Making of a Wounded
Warrior, published by Inkshares in May 2015. 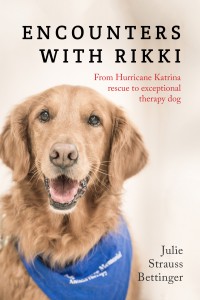 ABOUT THE BOOK
Encounters with Rikki tells the true story of the incredible partnership between Chuck and Rikki, a very special rescue dog. Rikki first found her home with Chuck and Patty Mitchell in the aftermath of Hurricane Katrina. Even though the golden retriever was a shy, shell-shocked puppy still adapting to the stress of displacement, Chuck recognized her innate abilities as a therapy dog. Together they bring healing and hope to recovering patients, accident victims, and the mentally ill. Soon Rikki’s quiet confidence attracts the attention of advocates of child victims. Called upon to testify in court, child witnesses must recall horrific memories in the presence of their abusers; the tireless work of Chuck and Rikki allows these children to do so with a therapy dog by their side. Inspiring and heartfelt, Rikki’s story illustrates the far-reaching effects of the human-animal bond.

Encounters with Rikki is now available at The Blue Giraffe!  ‘Pawtographed’ by Rikki if you order by June 7, 2016. Books will ship following the event. Click here to order online.